“In diesen heil’gen Hallen” (‘Die Zauberflöte’, W. A Mozart) – A Guide to Pronunciation and Interpretation 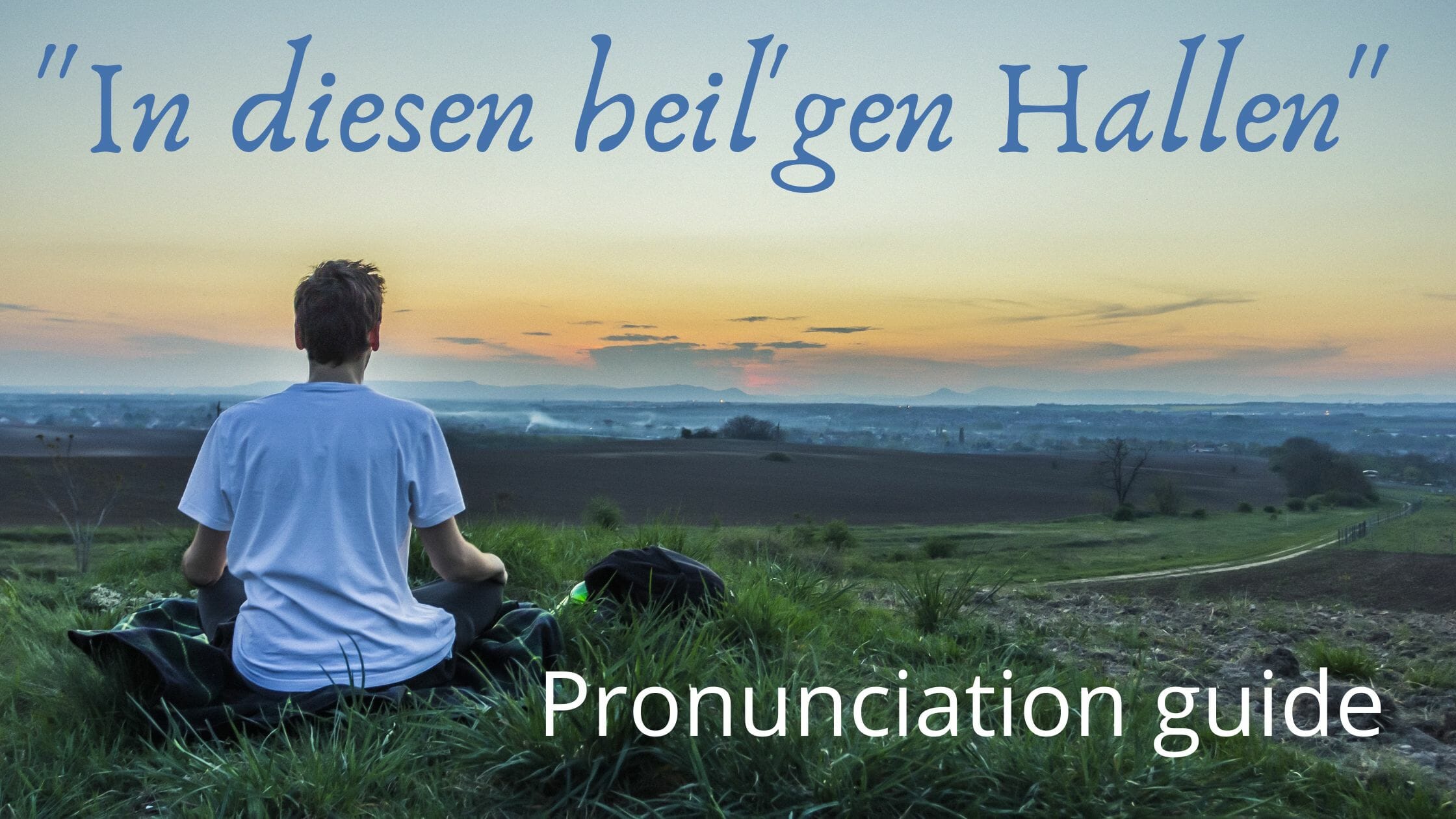 Translation, pronunciation guide and interpretation tips on W. A. Mozart’s aria “In diesen heil’gen Hallen” from the opera “Die Zauberflöte”

The aria is sung by Sarastro, high priest of the temple of wisdom in the second act of Mozart’s best-known opera, “Die Zauberflöte”.

Sarastro had kidnapped Pamina, the queen of the night’s daughter and she is know in his hands. Tamino, a young prince is sent to rescue and is promised her hand when he succeeds.

When Tamino is granted access to Sarastro’s temple he learns that Sarastro is good and he chooses to become part of Sarastro’s community.

Tamino has to undergo certain trials to become part of the community and gain Pamina’s hand. (Here you will find a guide on Pamina’s aria “Ach, ich fühl’s”)

In the meantime, the Queen has gained access to Sarastro’s place and meets Pamina. She gives her daughter a dagger and demands from her to kill Sarastro.

Monostatos, a servant has overheard the conversation between mother and daughter and tries to blackmail Pamina. When she refuses to come with him, he denounces her to Sarastro.

Sarastro, however, knows about the Queen’s plot as well as about Monostatos’ double game. Pamina begs for mercy for her mother and Sarastro calms her “In these hallowed halls, we do not know revenge”. (For a detailed description on the plot, look here.)

The aria is written in E major, a key slightly unusual for Mozart. It shows a contrast (also in content) to the bleak D minor of the preceeding aria of the Queen of the Night (“Der Hölle Rache kocht in meinem Herzen”). Here, calmness and peace are dominant, supported, of course, by the bass voice.

The beginning with the two different I sounds might be challenging: you have to start with a glottal onset and on a vowel that for some of us shows some difficulties.

The I of “in” is open, the one of “diesen” is closed; It may help you to hold the jaw position of “in” while speaking the N and go on with exactly this position to “diesen”.

I love the alliteration of “heil’gen Hallen”. However, some singers are unsure how the H at the beginning of a word is pronounced. The answer is: voiceless and not too sharp (NOT like CH), an English example for this sound would be the H in “home”.

The E sharp in “Hallen” tends to be flat, so make sure that you support enough during the phrase.

This is the essence of Sarastro’s brotherhood in a nutshell: they do not hold the common belief of “eye by eye, tooth by tooth” valid and do not “know revenge”.

Make sure to articulate the K of “kennt” clearly.

Furthermore, pay attention to the open vowels here: “kennt”, “man”, “nicht”. In case of “kennt” and “nicht” it may help you to think (only think!) of an Ö, respectively an Ü to produce the correct sound.

The CH-sounds in “Rache” and in “nicht” are different. To read more about “ich and ach”, click here.

The verb „gefallen“ – like „fallen“ – does not only mean a physical but also a moral or spiritual downfall.

Again, we have a glottal onset starting the phrase. Fortunately, this time it is an U (if an open one) which makes it easier. Nevertheless, avoid overdoing the glottal onset as it could otherwise harm your vocal cords.

Pronounce the D in “und” as T.

You might be tempted to guide the open E in “Mensch” towards an Ä-sound but I would recommend to (again) think (!) of an Ö.

The only closed vowel in this phrase is the [a] in “ein.

Not rules, nor the fear of punishment, i.e. nothing imposed from the outside world guides the human but only their morality deriving from love.

Make the Ü in “führt” closed and omit the R: [yɐ]. (Here you will find information on the German R.)

Make sure you articulate Z as combination consonant [ts]. It is never only one sound nor is it voiced. For further information on how to pronounce the German Z correctly, read this article.

Now “Pflicht” consists almost solely of consonants. I cannot give you a shortcut here, but recommend to practice it slowly at first while making sure that all consonants are articulated well.

„Wandeln“ is quite an unsual word to use here; neither “wander” nor “stroll” fully describe its overall meaning. In fact, it is sometimes used in connection with angels, describing their way of movement – strolling peacefully through Paradise.

In Sarastro’s world, your “opponent” will reach out for you and you will wander side by side. What a wonderful world!

The accumulation of the sound AN is remarkable here: we have it in “dann”, “wandelt”, “an” and “Hand”. In combination with the melody, this gives the phrase an easy, almost dance-like touch. After all, it shows us paradise. Who wouldn’t want to dance into it?

The H in “Hand” is the same as the H in “heil’gen” and “Hallen”: make it audible but not too harsh.

Here we have the joy and happiness we spoke of in the last phrase of the text. The “better land” meaning no physical place but a world with the values of Sarastro’s community, a world based on wisdom and love.

“Vergnügt” might be a challenge for some of you:

? Pronounce the Ü closed, articulate the Ts clearly and you are well set.

In the word “bess’re”, an E has been omitted, it’s common spelling being “bessere”. You cannot leave out the R here but must roll it. Just in case you missed the link above on the different pronounciation of the German R, click here.

The first stanza is done, the second of course is on the same melody. Let’s have a look at what to expect:

Here we have almost the same words and vowels as in the aria’s first line, only “Hallen” (halls) was substituted with “Mauern” (walls).

When a diphthong is to be sung on a long note, the first sound (in this case an open A) should last for roughly three quarters of the note. Then make a smooth transition to the second vowel (here: [ɔ]) and finish with the final consonant.

In this case the situation is slightly different as we have a third “vowel”, the schwa of “-ern”. So again, prolong the [a] for approximately three quarters of the melody line and instead of doing one, you just say two vowels at the end, making sure that they transition smoothly.

Attention: Do not dwell on the middle vowel but head towards the schwa.

Everybody is guided by both, self-love and “love to thy neighbour” . A perfect world where the vibes are so high that bad feelings cannot exist.

The rapid succession of the words “Mensch” and “Menschen” can be challenging, especially if you have trouble with the [nʃ]. Practice it very slowly at first and don’t let the eighth notes stress you.

Bear in mind, that the E here are open, whereas the I in “liebt” is a closed vowel.

The alliteration of „kann kein“ is a powerful way to express Sarastro’s side blow towards the Queen and Monostatos. Use the K to make your statement.

The same goes for the R in “Verräter”: it supports you in sounding thunderous but without frightening Pamina away again.

For the correct use of the diphthong AU in “lauern”, see my notes on that topic two lines above (“Mauern”).

“Feind” is a strong and negatively occupied word – like “Verräter” in the line above. I believe they were chosen to state that despite Sarastro’s (and his community’s) belief that love is the base for peaceful coexistence, they do not close their eyes from the reality outside their walls.

The E in “wen” and “Lehren“ is closed, the H in “Lehren” must not be pronounced.

You can (and should) combine the N at the end of “Lehren” and at the beginning of “nicht” and make use of this voiced consonant.

Contrasting to the enemies and traitors in the two preceeding lines, Sarastro summarizes that in his opinion love resides in every human’s heart and if someone does not like these thoughts (or lessons) they cannot be considered human (any more). He tells Pamina that in his opinion she – unlike her mother – is still human!

The I in “-dienet” is closed, the one in “nicht” is open. Make sure to make an audible distinction between both sounds.

Pay attention to the Z in “zu” (see Line 4) and remember that it stands for two sounds ([ts]) in rapid succession.

The challenge with this aria, in my opinion, is that despite being sung with this full, sonorous bass voice it has to be very gentle. Think of it: Pamina is scared to death! She fears revenge for what her mother demanded from her. And she has been brought up thinking that Sarastro is one of the bad guys who want to harm her and her mother, maybe might even force her to marry him.

Now you as Sarastro have to make sure that you calm the frightened young lady. Be kind, be generous, show her the path to this wonderful world where only love rules and no one has to fear anything.

Below I have attached two recordings of this aria.

One is with René Pape: