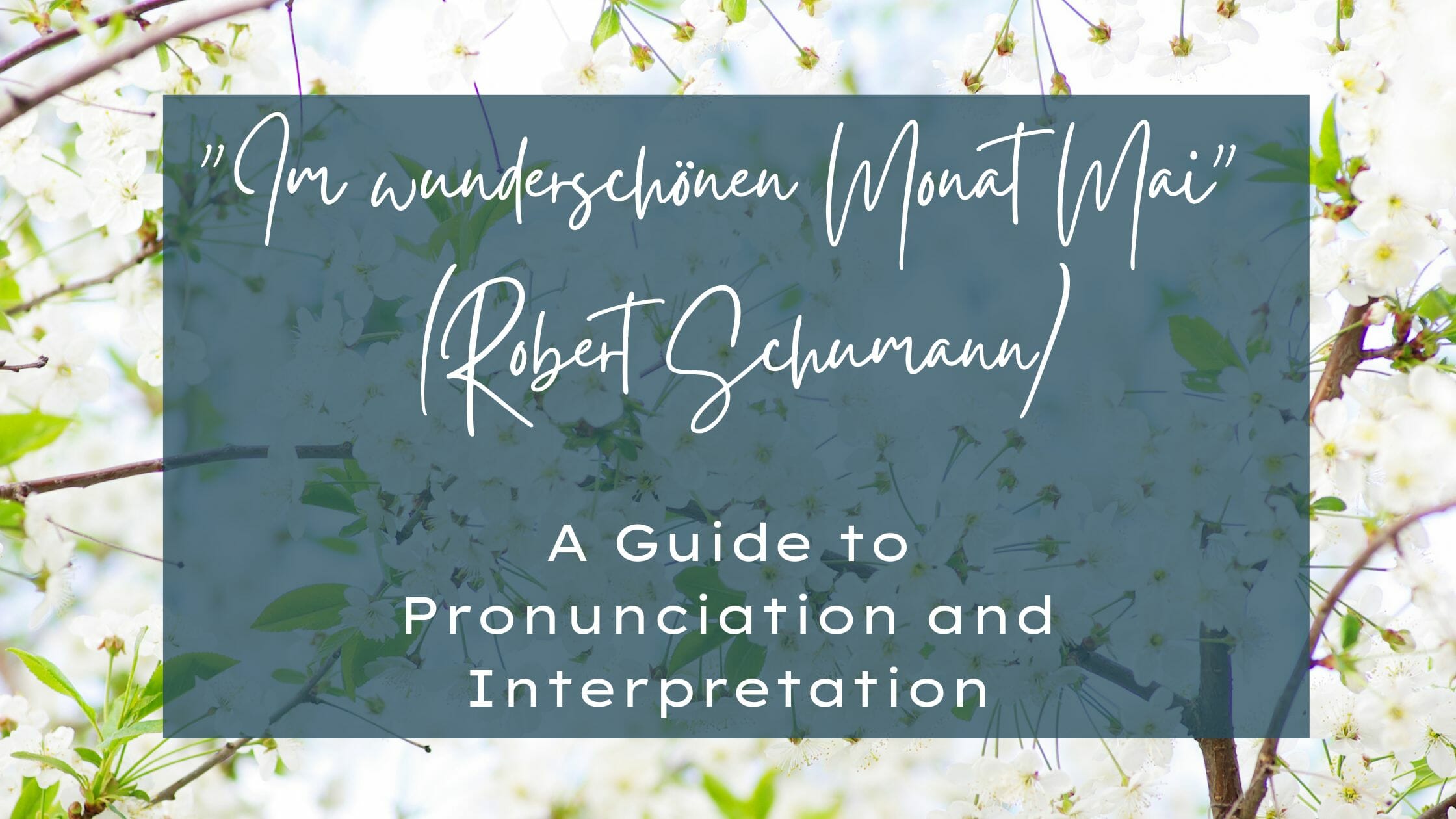 This wonderful, dreamy song is the first of the sixteen songs that form the song cycle “Dichterliebe” (‘Poet’s Love’) by Robert Schumann.

All poems Schumann used for “Dichterliebe” were written by the German author and poet Heinrich Heine as part of his cycle “Lyrisches Intermezzo“ (lyric intermezzo).
Schumann set 20 of these poems to music but removed four songs before pubishing the cycle.

Robert Schumann wrote the whole cycle in just one week in May (!) 1840.

In that year, he finally married his long-term love, Clara Wieck. Clara’s father had been strictly against that relationship and did everything he could to separate the lovers. The letters they wrote to each other during this difficult time are still available and I strongly recommend reading them as they give insight of their mutual ups and downs.

“Im wunderschönen Monat Mai“ consists of two stanzas and is written as a strophic song.

It starts with a short piano opening that doesn’t make it quite clear if it’s set in a major or minor key (the original was written in F# minor). Although at first sight (or rather: listening) it appears to be a sweet reminiscence of a spring love, the musical setting implies a small bitterness to the sweetness. In fact, the whole cycle “Dichterliebe” tells the story of a love that in the case of events is rejected and thus shows a series of emotions, from love to disappointment, anger and sadness.

We’ll tackle this song line by line and I’ll give you insights regarding pronunciation and interpretation by taking a closer view of the text:

The I and U in the first two syllables are open vowels, with the U a bit more challenging due to the long note. Nevertheless, make sure to pronounce it open. A trick that might help you is to think (!) of a closed O while singing the open U.

“wunderschönen” bears a further difficulty, the “-er”. Although I recommend pronouncing it as a schwa-sound [ə] and in doing so omitting the R, it might be easier for you to actually pronounce the R with one flap to get the preceding E-sound right. Here you’ll find an article on the different German R-sounds.

The O in “Monat” is closed whereas the A is open. For further information on German diphthongs like the AI in “Mai”, read this article.

The whole atmosphere at the beginning of this song is dreamy and reminiscent. The narrator is lost in thoughts about a certain period of his life that has been over now. He knows the outcome of the whole story (that is: the cycle) but at that stage we as audience do not know yet.

In this line we have only open vowels and unvoiced S. The SP in “Knospen” is pronounced as written, [sp], but the SP in “sprangen” must be pronounced as [ʃp].

Unlike for example in English, G in the NG of “sprangen” must not be heard. Just pronounce the [ɳ].

The sixteenth notes on the O of “Knospen” might be a bit tricky, especially the drop down to the third note. Make sure you sing this part very flexible and pay attention that you sing a clean legato.

This line is a natural description of buds bursting into bloom, describing the beauty of spring.

Both A in “da” and in “meinem” are closed, the remaining vowels are open.

Between “da” and “ist” we have a slight glottal onset which I recommend you should carry out. I’ve heard version where these two words are slightly bound together but the risk to blur the sounds too much is relatively high.

Remember that the Z in “Herzen” actually consists of two sounds, adding up to three when we count the preceding R. The mini consonant cluster must be carried out like this [rts]

Now we come to the main point of the story: the narrator recounts falling in love (which he will tell in the next line) and the music is building up tension. Make sure to hold this tension to the next line:

“die” and “Liebe” have long, closed I-sounds and again we have a glottal onset. This time between “Liebe” and “aufgegangen”.

As with “sprangen” in the second line, the G in the NG in “-gegangen” remains silent.

The crescendo which has already started in the preceding line increases. Naturally, it would culminate in “Liebe” but the Schumann’s music leads us to the climax in “aufgegangen”.

But please bear in mind: this is a romantic art song, not an aria. Don’t overdo the emotions here.

The second stanza starts with the exact same words as the first: “Im wunderschönen Monat Mai”. The narrator has fallen back into sweet reminiscence, the line being sung in piano again.

Again we have the glottal onset between “als” and “alle”, just like in the second line. And similar to that line, the sixteenth notes, here on “Vögel” must be sung as legato and flexible as possible.

If you want to read more on the German Umlaute like the Ö in “Vögel” you will find an article here.

In this line we have two glottal onsets, one before “ich”, the other before “ihr”. The first one might be omitted and slightly bound with the preceding “hab”, but the second one is necessary.

All A-vowels in this line are long and closed, as is the I in “ihr”; the other vowels are open.

As in the stanza before, the tension rises in this line, supported by a crescendo. Hold the tension. The audience can barely remain on their seat as they are dying to know what he confessed to her!

The A-sounds in “mein” and “Verlangen” are closed, as is the first E in “Sehnen”.

Also, the S of “Sehnen” is voiced.

The tension builds up further in revealing the confession: finally, we know that the narrator not only has fallen in love but that he actually confessed his feelings to the beloved.

This song bears several stumbling blocks or rather things you should watch out for:

One of the challenges, in my opinion, is to hold that balance between the sweetness of reminiscence on one side and the little bitter nuances we sometimes sense in the accompaniment and changes from major to minor.

Another difficulty is to hold the legato line while at the same time making sure to pronounce the text articulately.

And lastly, articulate pronunciation is one thing but it should never be overdone and interrupt the musical flow.

As in all pronunciation and interpretation guides, I have attached two recordings of “Im wunderschönen Monat Mai”. The first is sung by the “King of Lied”, Dietrich Fischer-Dieskau:

Usually, we expect “Dichterliebe” to be interpreted by a man. I’ve found a recording, however, with the wonderful soprano Christine Schäfer. A very intriguing interpretation:

← "Von ewiger Liebe" (Johannes Brahms) - A Guide to Pronunciation and Interpretation “Gretchen am Spinnrade” (Franz Schubert) – A Guide to Pronunciation and Interpretation →
← Vorheriger Artikel: How important are looks in opera? Nächster Artikel: 3 Simple Warm-Ups for Your Face (or How to Prepare your Face for Singing German) →