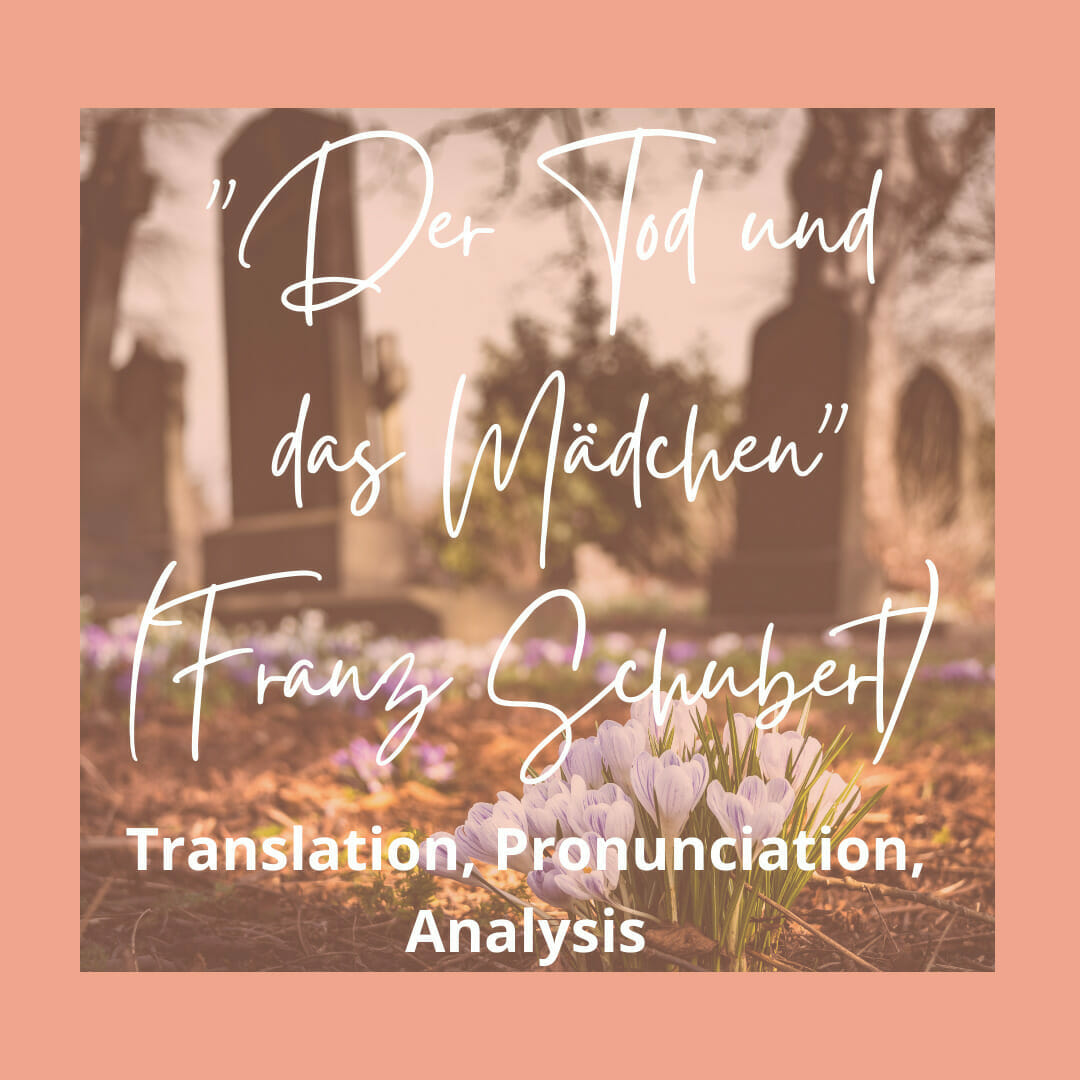 The following article is about Franz Schubert’s song “Der Tod und das Mädchen”. It provides you with a translation, a pronunciation guide and an analysis of the text.

Give your hand, you beautifuly and tender creature
I am friend and do not come to punish.
Be of good courage! I am not wild.
You shall sleep softly in my arms.

The poem on which Franz Schubert’s wonderful song is based, originates from 1775 and was written by German poet Matthias Claudius. Claudius uses the picture of an encounter between death and a maiden that death has come to take with him. This has been a well-known theme since the 15th century.

The poem consists of two stanzas with four lines each. In the first stanza the maiden is speaking and in her short exclamations we can sense her panic and fear of death. In the second stanza, death soothes her by telling her that he’s not a wild creature but comes as a friend.

Franz Schubert set this poem to music in 1817. It is written in d minor and consists of four parts: the piano prelude, the maiden’s part, death’s part and an postlude. The tempo is marked as “mäßig” which can be anything from andante to moderato.

The piano starts with a slow rhythm of one long and two short notes which is known as Pavane rhythm. This rhythm was often used for funeral marches and Schubert made use of it to paint the picture of death relentlessly entering the maiden’s room.

When the maiden sees death, she gets into a panic which is symbolized by the agitated accompaniment in the piano, the edgy rising and falling of the melody and the fact that the maiden’s part consists of an unlucky thirteen bars.

In part three, the rhythm of the beginning takes over again, and death speaks to the maiden. He introduces himself as friend, tells her to not be afraid of him and reassures her that she will sleep softly in his arms.

The song ends similar to it s beginning with the Pavane rhythm but this time in d major (key has changed in part three).

In this case, V is pronounced as F.
The first R in “vorüber” is rolled, the second as part of the end syllable “-er” is pronounced as [ə].
Make sure to pronounce the Ü properly; in case you’re not sure about its correct sound, read this article.

The maiden lies in her bed, ill and fatigued, when death enters her room. Seeing him she instantly realizes that he’s about to take her with him and she cries out in panic. Her agitation becomes clear not only in the piano accompaniment but also in the breathless pause after the first “vorüber” and the rising of the melody. It gives the impression of the maiden summoning all the power she has left in her body to hold death at bay.

The only closed vowel in this line is the E in “geh”, all the others are open.
Contrary to the line before, this here must be be sung in legato. Fortunately, there are no tricky consonants or clusters that would make a legato difficult. Just go with the flow and remember that the “-er” in “wilder” is pronounced [ə].

In this line, the girl shows a first peak of her fear, shouting at him that he’s a “wild bone-man”. We could almost imagine that she grabs a pillow and throws it – together with her words – at death.

It may be challenging to let the I of “bin” stay open during the long note but nevertheless make sure to keep it that way.

Here the girl changes her strategy and tries to reason with death by saying that she’s still young, implying that he should get old people first. Maybe it’s also and attempt to wake pity in death: being young she hasn’t had much of her life.

E, I and Ü in „Geh“, „Lieber“ and „rühre“ are long and closed, all the other vowels are short and open. Pay special attention to the two CH-sounds in “mich” and “nicht” and make sure that they are pronounced softly. In this article I describe the different CH-sounds in German.

Again, the girl changes her strategy and addresses death as lover. The use of the word “Lieber” here is interesting: had it been written in lowercase letters, it would have meant “rather” (as in “go rather”) whereas here, written with a capital L, it means “Dear”. There is some discussion going on about this spelling and some say that it’s an error of copying and it was meant as “rather”.

However, I like the idea of the girl trying to flatter death and thus changing his mind. Maybe it’s the way she has learnt to go when wanting something from others. The maiden tries  to smooth-talk death into leaving her alone, i.e. letting her live.

But already at “rühre mich nicht an” the accompaniment changes from the agitated rhythm into the long-short-short beat of the beginning.

By the second “rühre mich nicht an”, the maiden has realized that there’s no escape and she starts surrendering to her fate.

Although “gib”, “Hand” and “Gebild’” end with a soft plosive, you must pronounce them hard, that means as P and T. Make sure to pronounce every consonant of the cluster at “und zart” [unt tsart], especially the two separate Ts.

While in the former line the maiden panic-strickenly implores death not to touch her, here, death reverses roles and asks the maiden to touch him, or rather give him her hand. Apart from the physical touch, this choice of words can also be interpreted as giving him her hand in a kind of marriage. You remember that the girl addresses death as “Lieber” (“Dear”); death repeats as a lover, here.

A further proof for this theory is death’s description of the girl as “schön und zart Gebild’” (beautiful and tender creature).

While in the preceding stanza, death was purely described from the girl’s point of view as terrifying bone-man and her enemy, here death gives us a very different impression of his character. He does not attack but, on the contrary, asks her to give him her hand voluntarily. The accompaniment has slowed down again, making his advances very soft, even tender. All this, added to his admiring words for her beauty, give the impression of a lover seducing.

Here, again, the D at the end of “Freund” must be pronounced as T.

Pronounce the diphthong EU in “Freund” as a succession of [ɔ] and [ø], holding the [ɔ] for approximately three quarters of the note and finishing off with the [ø]. For further information on how to pronounce German diphthongs, head over to this article.

Here, death changes his „appearance“ from lover to friend, thus changing the common conviction that death is the punishment for severe wrong-doing. He makes it very clear that he does not come to punish anybody. The soothing effect is intensified by the melody being on almost one note only, calming the girl with its monotony.

The most genial twist in this line, however, is that Schubert changes the whole musical setting from minor to major during the word “strafen”. We can almost see how the girl’s view changes at this point from seeing death as a brutal enemy, to a lover to a friend (a father figure even) that can be trusted.

The S of „sei“ is voiced, the ending S of “gutes Muts” are both unvoiced. You may prolong the N between “bin nicht”, combining the two words to one and thus holding the legato line. Make sure to pronounce the T at the end of “nicht” and “wild” audibly but without overdoing it.

Death tells the maiden to have courage (instead of fear), promising that he is soft (not wild as she thought at first). Again, the melody dwells on one note only, increasing the girl’s trust into death and also lulling her into sleep.

The beginning S of „sollst” and “sanft” are both voiced and the combination of these two words may be a bit challenging due to the many voiced and unvoiced consonants in perceivably rapid succession. Make sure to pronounce every single sound distinctly and make a short pause between the two words so that you can start the voiced S of “sanft” anew.

We have reached the final state where the girl has surrendered to death completely. He promises her that he will hold her in his arms where she shall sleep softly. The poet picks up the idea of death resembling deep sleep. It is a very peaceful and soft picture conjured up in our minds that we hold during the postlude. 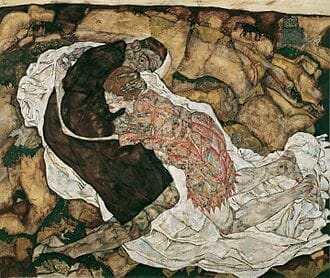 Schubert has mastered to set to music a picture of a whole world into a two-and-a-half-minute song. In it we not only witness a change of perception in the girl from regarding death as brutal, sentencing enemy to a loving and tender friend, we experience it ourselves by the genial musical setting (remember the  rhythm and the clever change from minor to major).

I never get tired of listening to this masterpiece of poetry and music. There are many wonderful interpretations out there and as usual I have chosen two of my favourite ones below.

The first is sung by the wonderful Dietrich Fischer-Dieskau:

This version is interpreted by the great Christa Ludwig: