This beautiful song opens Hugo Wolf’s first book of his “Italienisches Liederbuch” (Italian Songbook) which was composed in two parts, the first of which in 1891. The poems in the two books come from a collection of Italian poems collected and translated into German by Paul Heyse. 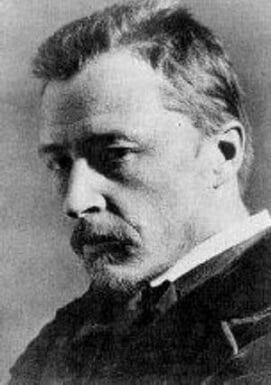 Wolf preferred high-quality poems which he set into high-quality music, contrasting to for example Franz Schubert, who often took mediocre poems but nevertheless set them to brilliant music.

Delving into the Hugo Wolf’s biography we could get the impression that he was not a very amiable character: a lazy pupil who got expelled from school, not getting his feet to the ground in the musical world, “switching sides” and working as music critic at a magazine – a job he only got because one of his patrons paid for it. In this profession he very clearly and mercilessly expressed his ardent admiration for Richard Wagner and his deep contempt of Johannes Brahms.

In 1887 (at the age of 27), he published his first twelve songs, quit his job at the magazine and dedicated his life to composing. During the following nine years he was extremely productive, wrote hundreds of songs, three operas, choral and instrumental music. Yet, his creative outbursts of productivity were often interrupted by periods of depression and anxiety,

Hugo Wolf also suffered from syphilis. In 1897, he slipped into syphilic insanity and spent most of the time until his death in 1903 in asylums.

Start the song tenderly. You are inwardly reflecting the topic. Imagine all the small things in your life that give you value, that delight you. I’m pretty sure that a smile will appear on your face. Hold that feeling when starting the song!

To sing the German diphthong AU in “auch” correctly, bear in mind that the U is pronounced as [ɔ]. Pronounce the EI in “kleine” as [ae] For more details on the correct execution of German diphthongs, head over here.

Also in “auch”, we have one of the German CH-sounds which in this case is pronounced [x].
If CH in German are a mystery to you, you’ll definitely want to read this article.

Make sure that the G in the NG-sound of “Dinge” is silent (like in the English word “ring”), even though a vowel follows.

The I in “Dinge” is open, as is the Ö in “können”.
If you’re not entirely sure how to pronounce a German Ö, this article’s what you’re looking for.

We have a consonant cluster in the word “entzücken”, consisting of four sounds (although there are only three consonants): [nt-ts]. It is important that you make a very slight stop between the two T-sounds and thus distinguish the prefix from the verb.

The repeated pitches on the changing syllables of “können uns ent-“ can be tricky regarding good tuning. I recommend practising this passage as one long note on the respective vowels (ö-e-u-e). Glide from one vowel to the other controlling your pitch. Only when you’ve mastered that, add the consonants.

The German word “teuer” (or “theuer” as found in some older editions) has two meanings, “expensive” and “precious” or “dear”.

In “teuer” we have the third variant of German diphthongs which is pronounced [ɔø]. Make sure that the ending “-er” is carried out as [ɐ].

The S in “sein” is voiced which is easier when – as recommended above – the preceding word ends with an [ɐ].

In this song line, the focus transitions from inner reflection to an outward-bound statementHere, we have reached the point where we address an audience of some kind, be it just one person or a group of people we are talking to. (Yeah, I know, “bedenkt” usually indicates plural but it can also be the former polite form of “bedenke”.)

You may make a very small caesura after “bedenkt”, but make sure to sing the whole phrase on one breath and not interrupt the legato line. Remember to pay attention to your pitch.

Although we have twice the vowel E in “bedenkt”, it is pronounced in two different ways: sing the prefix “be-“ as schwa [ə] and the E in “denkt” as [Ɛ]. The following idea may help you to get the pronunciation right: let the first vowel head towards a short and open [Ø] and the second towards an [æ].

The only long and closed vowels in this phrase are the I in “wie” and “wir”, all other vowels are open.

Don’t roll the R in “gern” as well as in “Perlen” too much; I’d rather recommend carrying them out as single tongue tap.
(Did you know there are three different ways of pronouncing the German R in singing? This article dives deeper into this matter!)

As I said, the Ü in “schmücken” is short and open and tempting as it might be to make it closed, please resist! Think (only!) of an Ö instead and you’ll get the right colouring.

The choice of words here, “schwer bezahlt” (heavily paid for) is uncommon in German; you’d rather say “teuer bezahlt” or, at best, “hoch bezahlt” which, energetically speaking, have a much lighter vibration. And Wolf did something genially here: to take the heaviness, and thus the seriousness of the word “schwer”, he set it at the highest note of an ascending line.

Brilliant as it is from a musical point of view, it bears a challenge for the singer as E and I are not our favourite vowels for high notes. That said, don’t sit on “schwer” but hold the legato line and head over to “bezahlt”.

“Werden” and “schwer” both have an R which, again, should not be rolled excessively but pronounced as a one-tap trill or even
as vocalic R.

Where the pearls addressed our visual sense, the olives here speak to our taste.

The combination of T/D-sounds in “ist die” may be a bit challenging, yet not that much when you know how to do it😊: hold the S a bit longer (thus, imploding the T-sound) and explode with a clear D of “die”.

The O and I in “Oliven” are long and closed vowels whereas the U in “frucht” is open. You may have an (open) O in mind when singing the U, just to give it the right colouring.

The syncope and dwelling on „Güte doch gesucht” provide this phrase with a dreamlike quality, awakening one’s desire or appetite (for olives, in this case 😉).

The I, Ü and U in “ihre”, “Güte” and “gesucht” are long and closed, the other vowels are all short and open.

Make sure to pronounce the CH-sounds in “doch” and “gesucht” correctly as [x].

The dreaminess increases here, with the phrase sung on only three notes. The three closed vowels of “Rose”, “nur” and “klein” add to this dreaminess. Imagine holding a small rose in your hand, tenderly protecting it from all harshness and admiring it for it’s beauty.

Start the phrase with a clear D and avoid adding a shadow sound (like N) before.

After vision and taste, we now address the sense of smelling. In my opinion, this is the trickiest part of the song: singing the “duftet” very tenderly and intimately on this high note. The F in “duftet” can be used cleverly to waft the rose’s perfume a little more.

It’s also interesting to see how the vowel colouring changes from the relatively heavy U/O (und duftet doch so) to a light I (lieblich, wie ihr wisst). Make this colouring audible without overdoing it.

The S in “so” is voiced, the double S in “wisst” on the other hand is unvoiced.

“Auch kleine Dinge” is an easy song regarding range but challenging when it comes to tone and tuning. The “little things” are demonstrated in small intervals and you have to make sure to tune the semitones perfectly.

Pick a tempo that’s not too slow (so as not to make it dramatic) and let your breath flow easily. Sometimes when we want to sing quietly and in tune, we tend to tense up, squeeze our throat and thus darken the voice. Make sure to sing this song very lightly and with a free (but supported) voice.

This is a song where you can let your imagination help you: imagine small things that are precious to you. It needn’t be pearls and olives, use something that you like and think of them as you sing about the poet’s images.

As usual, I’ve linked two recordings of “Auch kleine Dinge” by Hugo Wolf. The first is sung by Christa Ludwig: