“An die Musik” (Franz Schubert) – A Guide to Pronunciation and Interpretation 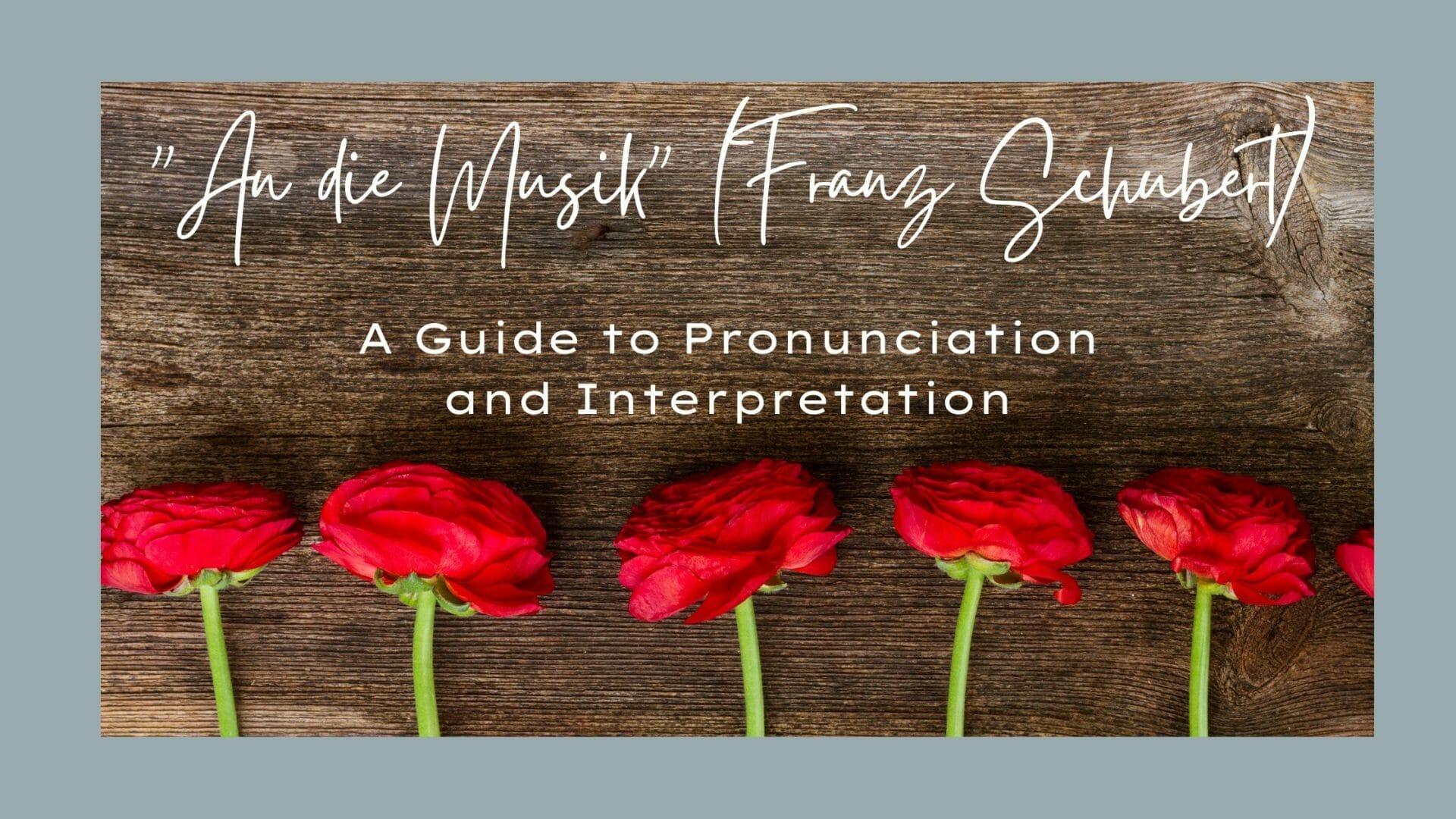 Oh noble art,
in how many grey hours
when life’s fierce orbit weaved around me,
did you kindle my heart to warm love
did you carry me away to a better world!

Often has a sigh, pouring from your harp,
a sweet, holy chord of you,
unlocked the heaven of better times
oh, noble art, I thank you!

In 1817, when this poem was written (and the song composed), the Napoleonic wars had just ceased a few years ago and Europe and its borders had been reordered in the Congress of Vienna in 1815. The goal was of course, to avoid further wars in Europe. Yet, the price for this prescribed peace was the suppression of national and liberal as well as democratic aspirations.

Every movement was watched suspiciously and censorship was extreme. Whenever something was to be published, even novels or poems it had to undergo a strict examination. Many works were censored, their writers even prosecuted. It was forbidden to bring books across a border.

In these times of post-war and restauration, severe suppression of free opinion and speech, Schubert and his circle (among it many poets) were in a constant conflict between the desire to express themselves and their thoughts and the need to stay out of conflict with the law.

It’s no wonder, they wished for a “better world” and I’m sure they meant it when – as in Schober’s poem – they used the arts to get there. Music helped (and helps!) to forget the sorrows and woes and to escape to some otherworldly place. 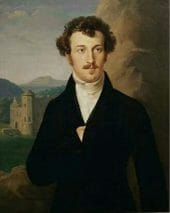 Franz von Schober (1796 – 1882) was an Austrian poetrist, librettist, lithograph, actor and “Legationsrat”. He was close friends with Franz Schubert, the sometimes even called themselves “Schobert”.

From 1818 they lived together in Schober’s apartment in Vienna. Schober loved the arts and was well acquainted with many artists, especially the ones in Schubert’s circle. It’s also due to him that Franz Schubert’s work became known during his life time and beyond. 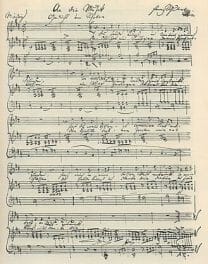 The poem is an expression of thanks to music. In these two stanzas the author (musician, singer,…) thanks music, the “noble art” for helping them getting away into a “better world”.

In his poem, Schober praises the Romantic view of music – or art in general – as a place of refuge and a means to alleviate the sorrows and pains of earthly presence like in a prayer. Art plays the role of a spiritual act as a kind of religious service.

This song is an expression of thanks as well as a prayer.

In this blog article, we’ll tackle the song line by line, analysing the obvious and underlying meaning of the text and looking at its pronunciation. let’s dive right in:

You’re addressing music like a person, yet it is taken as the most abstract form: art. If Schober hadn’t given his poem the title “An die MUSIK”, we wouldn’t know (at least not now) that he meant music. Art is the umbrella term here and could mean anything: music, poetry, painting, drawing, singing,…

The German word “hold” means friendly, lovely, graceful – words we usually attribute to a woman and which are here attributed to music.

In this line, the U of “Du” is the only closed vowel. Make sure that all the other vowels are open, especially the U in “Kunst” as contrast to “Du”. As “Kunst” has to be held rather long, it may be a bit of a challenge to fing the right colouring.

It’s interesting that Schober doesn’t refer to “dark” (= black) but “grey” hours. Grey is a rather neutral color that doesn’t stand out, and thus doesn’t necessarily represent gloom or tragedy but the gnawing distress of constant worrying, sorrow, boredom, dullness,

I guess we all know these hours of nothingness, where we feel burdened, bored and frustrated. Times like these make us either feel trapped and bound, not to be able to do what we want; or bored and frustrated because we cannot see a way out. Either way, it’s a mixture of anger, frustration and hopelessness that makes hours “grey”.

The I in “in” is open whereas the I in “wie” and “vielen “ are closed.
Make sure you get the diphthong in “grauen” right: hold the [a] for approximately three quarters of the note length and then glide over to the [ɔ]. You’ll find more information on how to pronounce German diphthongs correctly here.

Pronounce the U in “Stunden” open. This may be a bit of a challenge as the note is relatively long. Nevertheless, don’t get tempted to close the vowel too much (see “Kunst” in the preceding line).

What an incredibly poetic use of words! We can see life weaving a net around us that gets tighter and tighter. And why does Schober use the word “wild”? Did he really mean fierce – which would imply some malicious intent? Or did he mean “uncontrollable”, meaning that life’s a series of (sometimes bad) incidents? These may seem petty thoughts but it’s important that you as a singer make up your mind about them. What’s your impression in this case? Although no one will ask you about it, it’ll mirror in your interpretation.

The O in “Wo” and the first E in “Leben” are the only closed vowels in this line. Make sure the CH-sound in “mich” is not to throaty – you’ll find invaluable information on the different CH-sounds in German here.

You can either pronounce the -er in “wilder” as a schwa: [ə] or with a one-flap R which alters the vowel to [Ɛɾ]. There’s more information on the different uses of R in German in this article. Make your choice and stick to it throughout the whole song.

How great a contrast between this and the preceding line, between “life’s fierce orbit” and the “kindling of warm love” in one’s heart. It’s a bit like being in the eye of the storm: no matter how insane things are around you, you are calm and safe, warm and full of love – thanks to music.

In order to hold the legato line, we must make several implosions here, for example “has-du”, “en-tsunden”. The succeeding Zs in the term “Herz zu” are a bit tricky because you must pronounce the double sound TS twice in rapid succession. (More on the Z here).

The -er of “warmer” is pronounced similar to “wilder” in the preceding line (see there).

Make sure to articulate every sound of the TZ in “entzunden” very clearly: [Ɛnt-tsun-dƐn]

A better world. What better place to get put into, especially when things are hard and you don’t have any control on the ongoings in the world’s turmoil around you.

“Entrückt” is an interesting word: in the beginnings of its use, it meant something like “being taken with force”, but later on it got a spiritual touch, meaning that mind or soul (or both) went or were taken beyond material boundaries into a spiritual world.

This line is repeated, showing us its significance. The stress in the first time lies on “Welt”, whereas at the repetition it lies on “bessre”. With the repetition and the different stresses, Schubert covers both important words.

Except for the A-sound in “eine”, we only have open vowels here.

Prolong the (open) A of „hast“ and speak the STM (“hast mich”) as late as possible to uphold the legato.
The same goes for “bessre”: prolong the first E (which is open) and take the S as beginning of the next syllable (-re).

Here we have the image of music as a human being, holding a harp that sometimes pours out “sighs” (which get specified in the next line). When at first, music was addressed as “art”, that is an abstractum, we now have a personification. This increases the intimacy of the second stanza, giving it the touch of a love song.

Again, we have only one closed vowel in this line and that is the A-sound in “deiner”. All other vowels are open.

Make a small caesura after “Seufzer” – the comma is often a good indicator when to make a pause or draw a breath.

A “sweet” and “holy chord”. The words already tell you how to sing the phrase: sweet and holy.

Make sure to pronounce the S at the beginning of “süßer” voiced, the ß unvoiced. Again, you can make a small caesura between “süßer” and “heiliger” – not only because of the comma but also because these two words describe very contrary characteristics.

Although I’d recommend pronouncing the -er of “süßer” and “heiliger” as schwa-sounds, you may also articulate a discreet one-flap R if that makes it easier for you to combine them with the following words.

The R in “Akkord” must be clearly audible.

In the first stanza we were “taken to a better world”, presupposing that this world exists now, maybe parallel to our world or the circumstances we live in.

In this line, however, music unlocks the “heaven of better times”. We have switched from locality to temporality, indicating that right now we do not have good times but that they will come.
One could argue that this is only a hope expressed. Yet, in my opinion the poet/singer already feels the energy of this not yet visible paradise, either implying that its appearance is right around the corner or – by imagining and feeling it – we play an active role in materializing it.

Be aware that “erschließen” not only means to unlock but also to (make) understand something. As “heaven” implies a spiritual place (not a material one), this may refer to experiencing spiritual bliss.

The E in “den” and the A-sound in “Zeiten” are the only closed vowels in this line.

As in the preceding line, the -er of “bessrer” and “erschlossen” as well as “mir”s may be pronounced as schwa-sounds or with a one-flap R.

“Himmel” may be a bit of a challenge here, especially making sure that the I is open throughout the relatively long note. As a trick, you could think(!) of an Ü to give the vowel the right colouring.

Similar to the end of the first stanza, Schubert switches the musical focus and thus the stress in the repetition: the first stress lies on “dir”, the second one on “danke”. The song ends (almost) with the same words as it has begun “du holde Kunst”, forming wonderfully a closed circle.

Be careful that the A in “danke” doesn’t get too nasal. This is a common issue with vowels followed by NG or NK. Be very strict with yourself and pay close attention to the production of a clear and brilliant A.

All vowels, except the E in “danke”, are closed which makes it very easy in this context.

Do not pronounce the R at the end of “dafür”; you may make the R in “dir” a one-flap R – but only the first time when it is followed by “dafür”. In the repetition where the line ends with “dir”, the R shouldn’t be pronounced.

Although the song is considered a beginner’s level it has its challenges.

The first is to keep the vowels open even on long notes. Vowel coloring is very important

Next, we have the legato lines. Thankfully enough, there are no difficult consonant clusters to be taken care of here; nevertheless, the fluent combination of words is not always easy.

And last but not least there’s the challenge to sing this song with a real intention of thanks. Don’t become tempted to get overly sentimental or pathetic. Schubert is anything but that!

As usual, I add two recordings of this wonderful song. The first one is sung by the late Christa Ludwig:

Whereas this version of the song is interpreted by Julian Prégardien: