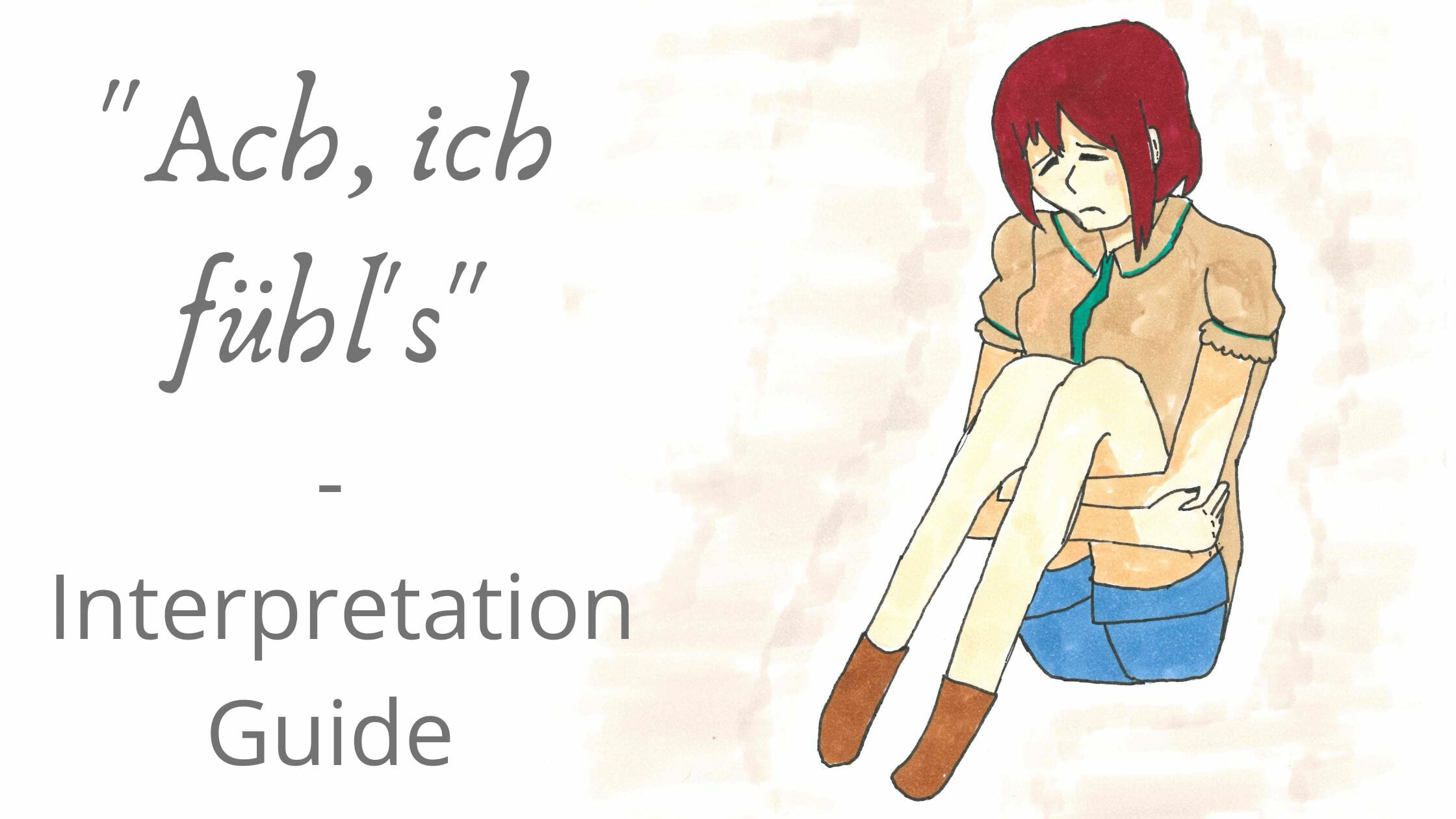 This aria is sung by Pamina, the Queen of the Night’s daughter in the second act of Mozart’s best-known opera “Die Zauberflöte”.

Pamina was kidnapped by evil Sarastro, the Queen’s enemy. The Queen sends Tamino, a young prince, to rescue her daughter; he sets out, accompanied by Papageno a bird-trader and “strange bird” (himself).

When Tamino reaches Sarastro’s temple he learns that Sarastro is not evil but good; he enters the temple to find Pamina (and eventually become a member of Sarastro’s crew). (For a detailed description of the plot, click here)

When Tamino and Pamina see each other for the first time they both fall in love with each other. The more bitter it is for Pamina when she meets Tamino for the second time and he does not talk to her! Not knowing that he has taken a vow of silence , she, of course, thinks that he does not love her (anymore)

In the aria “Ach ich fühl’s”, Pamina expresses her sadness and despair over Tamino’s silence and rejection, announcing suicide at the end.

The aria is written in a deeply-sad G minor key and begins with a very short orchestral foreplay, resembling a funeral march before the soprano (Pamina) sings – or rather sighs – her first words “Ach, ich fühl’s”.
These three words already bear three difficulties for non-German singers: the two different CH-sounds of “ach” and “ich” and the Umlaut “Ü”.

In this blog post here, you can read about the ach/ich-sounds and here you will find more about the formation of a correct German Ü.

Although there is a break after “ach”, the phrase should be sung in one breath leading towards “fühl’s” where the emphasis lies.

(In some versions: „es ist verschwunden“): make sure the „es“ is a pure open German „e“ not an „ö“. Keep your mouth position for the “ist”, it will make the leap to the G sharp much easier. Also, pay attention to the two “t”s in “ist” and “entschwunden”: they must be audibly articulated but not over-exaggerated.

The consonant cluster in “entschwunden” may seem difficult at first. Practice it slowly and support very well. If you then keep in mind that both the “n” and the “w” are voiced consonants and that the “sch” represents only one sound, the perceived three million consonants have melted down to two. ? The emphasis in this phrase lies on the “schwund” of “entschwunden”, not on “ist”.

As here we have almost only two vocals in different facettes (“e:” and “i:/y:”), keep the position of your mouth in nearly the same position throughout the whole phrase. On “ewig” we have the first small coloratura. Sing it as legato as possible and make sure to have perfect pitch of the D in “ewig” which sometimes tends to be flat.

The repetition of this phrase is very tricky regarding vowel colouring. Especially the leap from “der” to “Liebe” (B flat) can only be managed with a lot of support on the letter “d” of “der” and an adjustment of the [i:] vowel in “Liebe”. It may help you to think an [a:] while singing the [i:].
The [y:] of “Glück”, however, must not be changed. “Glick” is not right.

In my opinion, this short phrase in major key is the saddest part of the aria. Bittersweet, it is both reminiscence of the “Wonnestunden” and the realization that these hourse of joy and bliss will never come back again. Notice that we have three consonant pairs which make the preceding vowel short and open: “nimmer”, “kommt” and “Wonne”.

The [i:] in “ihr” is the only long and closed vowel here.

The first phrase is sung slightly pushing forward as realization sinks in. Its repetition, with this beautiful but tricky legato line may resemble some inward (!) sobbing. Take a good breath before “meinem” to sing through to the staccatti and maybe even to the end of the phrase. Make the “k”-sound of “Glück” very pronounced.

“Sieh, Tamino”: For the first time in the whole aria Pamina addresses Tamino directly, i.e. going from inward contemplation to actual speaking. Sing it on one breath and make sure to keep the support during the break between “sieh” and “Tamino”. Some singers do this part in a more dramatic way, thus expressing the outward communication (or the attempt of it); others make it a very tender approach, impersonating the woman traumatized by rejection.  How you interpret this passage is up to you (and the conductor) but make sure that it stays Mozart and does not become a Wagner or Puccini.

⫸ Pronounce the “t”s of “Tränen” and “trauter” clearly;

⫸ The only sure [r]-sound is the one in “Tränen”. The “r” in Trauter is a [ə], “dir” is usually pronounced as [di:a], followed by a glottal onset of “allein”. It may be pronounced with a  one-flap “r” to avoid this onset. In the latter case, the “r” must not be more than a hint.

“Fühlst du nicht der Liebe Sehnen”: The combination of the “t” at the end of  “fühlst” and the “d” at the beginning of “du” is a bit difficult. With the rhythm, it is impossible to pronounce both expressly so we make a short stop at the “s” of fühlst, prolonging it slightly (!) and pronouncing the “d” of “du” a bit more articulate than usual. The “I”s of “nicht” and “Liebe” have once more to be adjusted towards an “a” as both lie on an A flat and B flat and are sung very piano, resembling an almost soundless cry.

“So wird Ruh im Tode sein“. Here we have only dark, dull vowels (o, u, a [zaen], determining the bleak atmosphere of Pamina’s last words in this aria where she announces suicide. Make sure to make the “m” of “im Tode” audible, its nasal characteristic will help you.

A further challenge in this phrase is the octave leap of the second “so wird Ruh”; it may help you to make a breathy, unvoiced “r” sound (one-tap flap) and set the “u” of “Ruh” onto the G sharp, i.e. not start on the G sharp with an audible rolled “r”.
“Im Tode sein” is repeated three times. It seems to me (but again, this is only my interpretation) that the first time Pamina sings these words, she is just speaking (or rather: singing) her first thoughts out loudly, frightening back when she actually hears herself say it (pay attention to the dissonant chord). She then tries again the taste of the words “im Tode sein”, culminating in a very quiet, yet determined, last repetition.

I think the most difficult aspect of this aria is that Mozart’s “Zauberflöte” is the most frequently played opera in the world and a large part of your audience will know the arias by heart and in manifold interpretations. Despite its deceptive simplicity it is not easy to perform (a characteristic that is a rule with all Mozart’s music), not only for pronunciation reasons but also because it is sung almost throughout in piano and with difficult legato lines, accompanied quite sparsely.

Below I have attached two recordings of this aria.